It’s always a treat to have dinner at Mozza in any of its various incarnations on the corner of Highland and Melrose – be it the Pizzeria for lunch with the kids, a girls’ night out dinner at the Amaro Bar at the Osteria, or a pizza class at Scuola di Pizza – or treat above all treats Mozza 2 Go in front of the fire at home whilst watching a really great movie. However, the treat that beats all of these is having dinner there hosted by Joe Bastianich and Nancy Silverton, the two of them up close and personal and in the house!

I am lucky to be able to count Joe as a friend, we have shared some really fun times together, usually in the form of some sort of road trip: A ‘pub crawl’ in his grease fueled truck to his many establishments in New York, with bubbles rather than the usual pint of beer at each stop. Or the time I drove him down to his audition for Masterchef (he texted to ask what pizza I’d like for the ride – nice!), in a torrential rain storm when we laughed about living an episode from Entourage and since I was the driver that qualified me as Turtle. Once he insisted on collecting me from JFK in the freezing cold and then whisked me into the city for Champagne at Babbo. Along the way we have shared food, vino and laughs – and have a surprisingly high score of some appalling lunches and dinners together but that’s another story and for the sake of kindness probably best never discussed. Back to the pig… 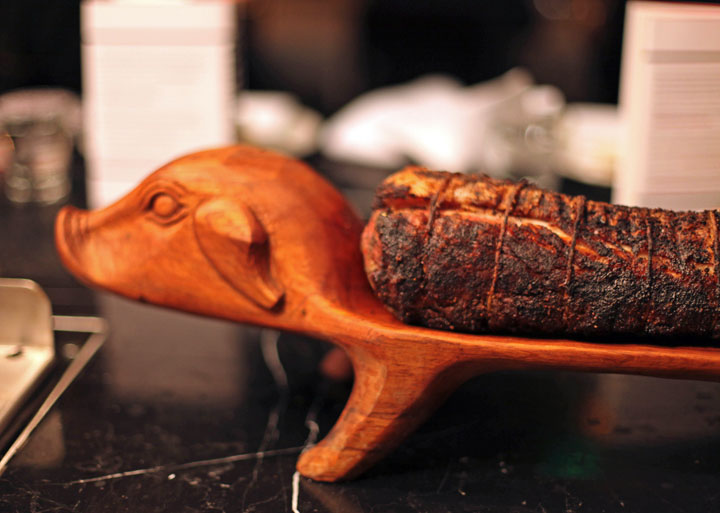 What I love about dining in the Scuola di Pizza is being right next to where the food is being cooked. You literally eat in the kitchen as Nancy, Chad, Daliah and their trusted crew cook and plate the next course at the stoves behind the black marble counter. If you haven’t yet booked a class or family dinner – be it pizza, butchery, pork or desserts you really should.

The Feast of the Pig is a tradition from Italy, in particular the area known as Friuli north of Venice, where Joe’s family are from. Joe explained that the pig is killed in the morning and the day is spent making dishes from each part – nothing is wasted – a tale of snout to tail that stretches back over centuries. I didn’t want to think about piggies eyelids going into the sausages – this is how we always referred to sausages growing up. Sometimes it’s best not to dwell too much on what you are eating and just enjoy the flavors. I was sitting next to Krissy Lefebvre (Ludo was sick and couldn’t make it) and she was adamant that her sausage looked better than mine! Do guys have these conversations? 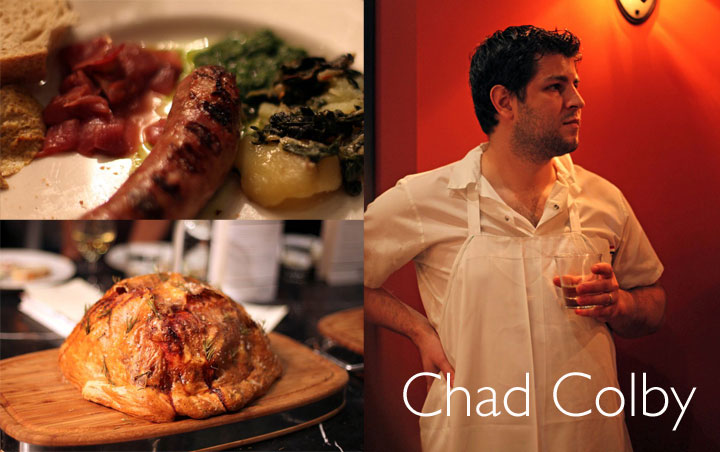 Joe paired wines that he makes in the Friuli region with the multi-course dinner that Chef Chad Colby had prepared from a single pig. Not surprisingly there was a lot of pork – salumi, sausage, soup, ham, roast loin, a giant pork pie – each dish more delicious than the previous course. At the end of the evening Chad proudly showed me the salami curing made from Gloucester Old Spots [we raised two on the farm in Devon when I was a child – named Princess Mary and Princess Elizabeth – or some such royal name that can now be found starring in The King’s Speech!] I’m still campaigning with hubby to let me keep Mangalitsa’s up here in the Hollywood Hills for bacon and pork chops and Remy’s already decided they are going to be called Pinky and Perky. 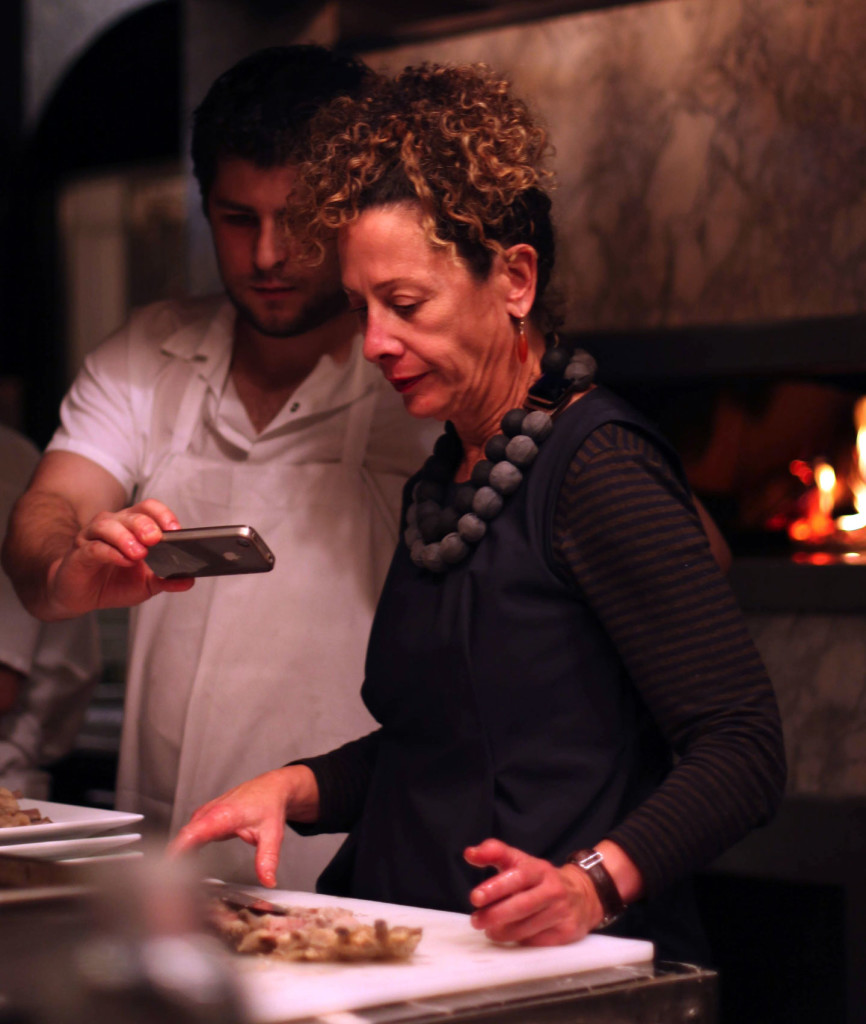 Even chefs like to snap a pic of their handy work in the moments between the stove and the plate.

I really wish I could have eaten more food because when dessert came I was full to bursting – the golden pancakes pushed me over the edge and I knew I’d reached my limit! That’s until I noticed the blood orange sorbetto – but then as an exboyfriend always insisted on saying, there’s ALWAYS room for ice-cream. 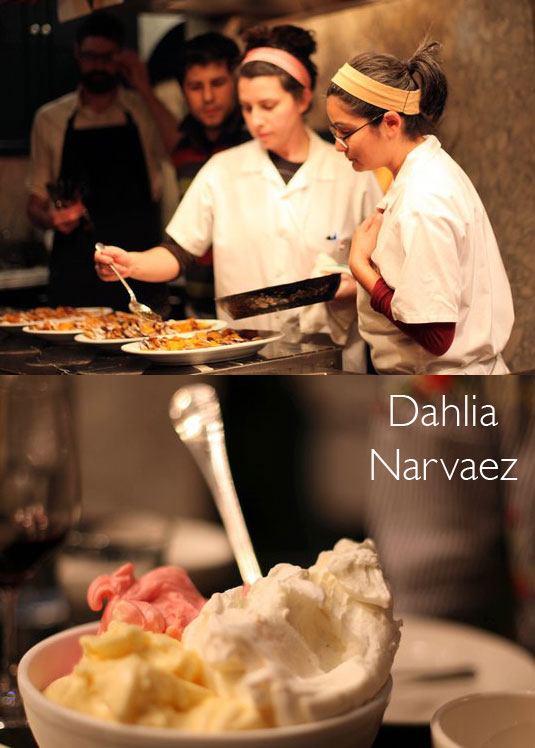 Part of our evening’s entertainment was having Joe tell us about his mother’s soup and how Chad had managed to recreate something as good as anything Lidia had ever made – a Proustian moment Chad should be proud of because Joe came back to the soup story later in the evening. He also mentioned in passing the award winning wines he and his mother are making in this region of Italy. Joe explained how the Friulano is an indigenous grape variety to the region of Friuli. If I’m not drinking bubbles – the Flor has been a go to prosecco during the holiday period – mainly because I like the bottle, then I’m a big fan of the Vespa Bianco – all I know is that it paired really well with the pork and most importantly didn’t give me a headache.

Our going home present was a signed copy of Joe’s new book Grandi Vini: An opinionated tour of Italy’s 89 finest wines. I’m looking forward to exploring this ancient bevarage – vino – in more detail through Joe’s dry wit with it’s lingering clean finish and because it gives me reason to open a few more bottles – tasting anyone?

« Perfect Pancake Recipe – from scratch
Curtis Stone Outstanding on the Beach – One Hot Aussie Chef not just for Oprah! »